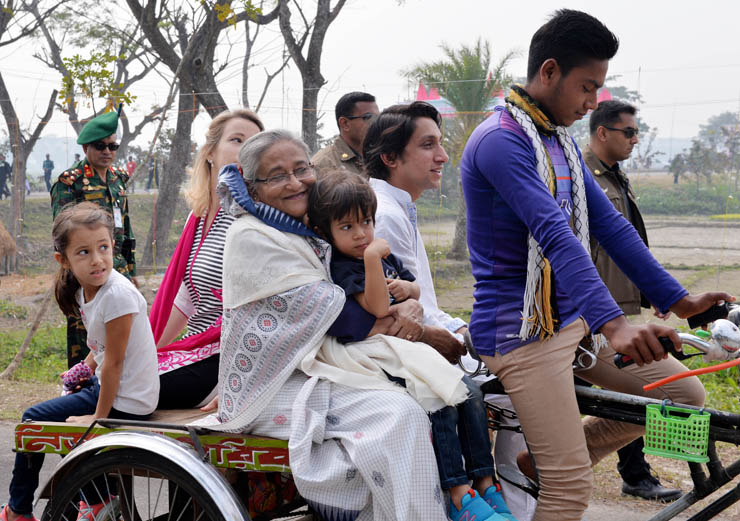 The residents of Tungipara saw a rare as well as unprecedented scenario in the late morning of the day when Prime Minister Sheikh Hasina on a local rickshaw van along with her family members had a round-about visit at her ancestral village to see for herself the condition of the villagers side by side enjoying the natural beauty.

"It was really a great surprise for the villagers, who saw their beloved Prime Minister breaking her security barriers and busy schedule let herself out quite openly among the people in the village, the ancestral home of herself and also Father of the Nation Bangabandhu Sheikh Mujibur Rahman," PM's Press Secretary Ihsanul Karim told today.

He said Sheikh Hasina, elder daughter of Bangabandhu, went out of her Tungipara village home at about 11 am and had a 15-minute ride on the van, plying nearly one kilometer road from the mausoleum of Bangabandhu. As a matter of fact, it was a sweet reminiscence of her early age, when she used to spend her days in utter childhood merriment.

Taking Kaius Mujib Siddiq on the lap, the prime minister had her cordial exchange of mind with the villagers and enquired about their well being after stopping the van at different places of the road. Later she returned home by walking about one kilolmeter road, yet another surprise for the villagers.

While talking with the premier, the local people raised various problems before Sheikh Hasina, who instantly directed the officials concerned to solve the problems, the press secretary said.

Prime Minister Sheikh Hasina went to Gopalganj on Thursday on a two-day visit to open the 11th National Rover Moot, the biggest gathering of the Rover Scouts, there. After opening the moot, Sheikh Hasina paid a visit to Tungipara to place wreaths at the mazar of Bangabandhu, offer fateha and join a special munajat there.

Earlier, the prime minister visited Bangabandhu's ancestral home at Bank Para in Gopalgonj town, now being used as the district unit office of Awami League. Sheikh Hasina stayed overnight at her village home in Tungipara and left Tungipara for Dhaka this afternoon. -BSS