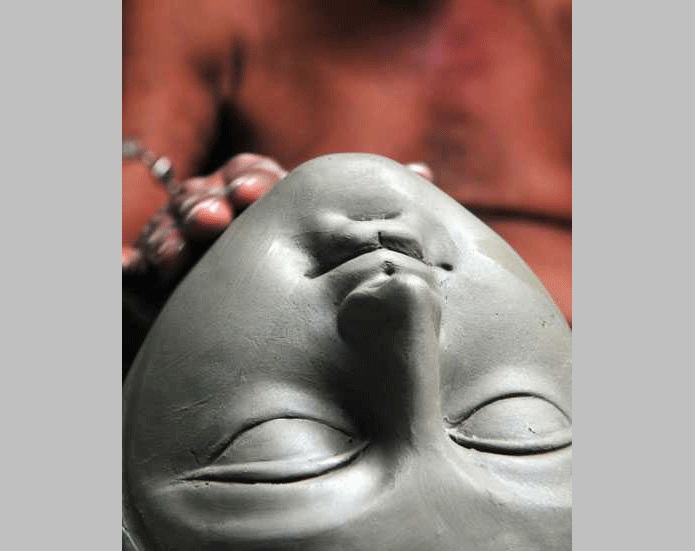 Mauli Azad, a young Bangladeshi fiction writer, has six books to her credit.Translated from the Bengali by MOHAMMAD SHAFIQUL ISLAM.

Coming back home, you only shout, why?” says Rani, Krishna’s wife. By profession, Krishna is a potter.

“With a basket on the head, I wandered the whole day, in this scorching heat, but couldn’t sell even a single piece. Should I then worship you?”

While talking, Krishna mops sweat from his forehead with his gamcha. Since he couldn’t sell a single pottery item, his temper has risen high. With all force, he now kicks the basket. The clay items break instantly.

Hearing the sound, Krishna’s wife storms into the spot.

Seeing the broken plates scattered around, she strikes the forehead with her hand and says, “Why are you so angry? You’re kicking our luck this way? We struggle to live hand to mouth, yet you’re such obstinate!”

Krishna is already annoyed, and Rani’s words add to his fury, as if someone threw chili powder in his wound.

Rani says, “Ha, you can burst in anger only! Nothing else. You aren’t even able to earn better. Potters of your age have built beautiful houses. And you? What kind of potter are you? You couldn’t built even a good clay house until now. Married so long ago, but I’m still wearing these old bangles. You won’t have the ability to buy me new bangles in this life. You can show only anger and obstinacy! Change your attitude, understand? Work sincerely so you can create human statues with clay. See how the statues sell. People from the market will crowd to buy the statues. You never listened to your wife – now try to change your attitude.”

For his stubbornness, Krishna never liked to hear Rani prattle. Like before, he doesn’t feel good listening to her this time too. Still angry, he remains seated in one corner of the room. Next morning, Krishna decides he won’t go to market anymore; neither will he do anything else – he’ll only stay home. But he’ll feel bored sitting idle, his hands will itch to do something. He deeply feels to create something with clay. But what will he create?

To create something, I should knead soil first – thinks Krishna. There will be time to decide to create something. He now kneads soil so carefully that it seems he’s going to transform it into gold. Gray soil wedged in his hands doesn’t seem to have been trodden by human beings. It seems to be a piece of gold. Krishna can instantly feel what he’s going to create with this golden lump of soil. He thinks he’ll create a loveable human figure. Illiterate, Krishna heard that in rich countries, human figures are created with machinery too. Those humans, he came to know, also speak, and follow commands. Krishna can’t make out what kind of humans are created out of machinery. However, these sporadic thoughts are worthless for a man like him. A very ordinary potter, he’ll think of creating only a clay statue with soil – that’s all. Though living, he himself is a human created out of soil. A living human being, he’ll create six or seven clay statues of both man and woman. His body shakes in excitement when he thinks all this. All alone, he smiles too. So many potters have created so many clay statues. So many varieties of statues with large eyes, snub noses, sunken cheeks, thin lips, long and winding hair have already been created.

Krishna thinks – I may be an ordinary potter, but I won’t create human statues with clay as other potters do. The clay humans I’ll create will be completely different. I know I can’t render them true hearts, but I’ll certainly create the humans whose images come to my mind over and over. Krishna thinks that he can do the work well, and it’ll bring him pleasure too.

With lumps of soil, he begins to create a statue. The soil has been kneaded so well that Krishna thinks he’ll be able to create a loveable human figure as he has imagined. I may not give them true hearts, but I’ll create the figures after the images drawn in my mind. With kneaded soil, Krishna begins to create a kind of human who is simple-hearted, compassionate, who doesn’t tell lies, and who doesn’t even know himself fully. But what’s wrong with so well-kneaded soil today? In no way, Krishna can give a complete human form. Lumps of kneaded soil are collapsing now and again.

All by himself, Krishna laughs and thinks – I’m a very ordinary potter, so why am I trying to create a simple-hearted and compassionate human who doesn’t tell lies, and who can’t even know himself fully?

Should I dare attempt to do what even God couldn’t?

Mohammad Shafiqul Islam teaches English at Shahjalal University of Science & Technology, Sylhet 3114, Bangladesh. He can be reached at [email protected]