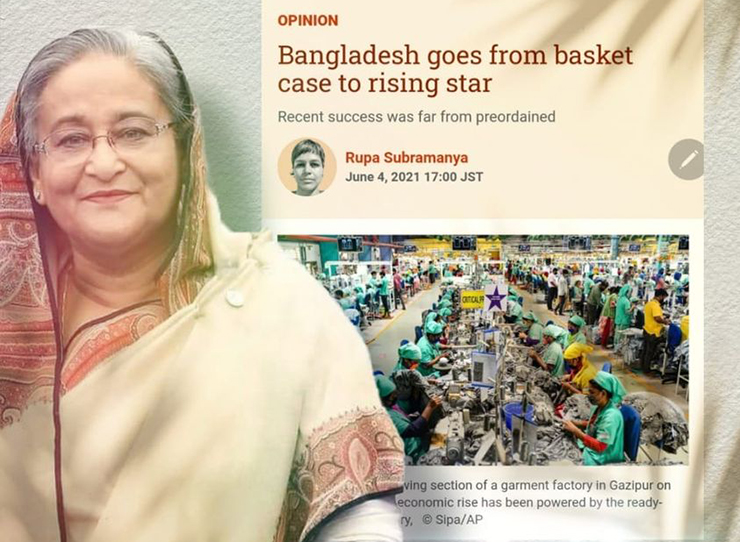 May 25 was a historic day for the small South Asian country of Bangladesh, when its central bank approved a $200 million currency swap facility for the nearby island economy of Sri Lanka.

Bangladesh, which had been famously written off as a "basket case" in 1971 by U.S. President Richard Nixon's national security adviser, Henry Kissinger -- shortly after the country's creation following a bloody war of independence with Pakistan -- has more recently shed that label.

In the 2020-21 fiscal year, Bangladesh for the first time ever overtook its giant neighbor India in terms of per capita income at market prices, although Indian chagrin was assuaged to some extent by the fact that it remained ahead in per capita income measured at purchasing power parity. Nevertheless, that Bangladesh has so rapidly closed the income gap with India, without whose intervention the country would never have come into being, represents a significant shift of economic prowess in the region.

Bangladesh's economic rise has been powered by the ready-made garment industry, which according to a March 2021 report from McKinsey & Co., a management consultancy, accounts for fully 84% of the country's exports after recording a compound annual growth rate of 7% for the last decade.

As the report notes, the phenomenal growth of the industry was born out of tragedy, following several well-publicized factory tragedies in 2012 and 2013 that led to the loss of more than a thousand lives. Facing the prospect of losing important customers, and the loss of tariff preferences in the U.S., the sector was forced to restructure and has since moved from strength to strength.

After ready-made garments, remittances from the country's diaspora are Bangladesh's second-largest source of foreign exchange earnings. In the first 10 months of the 2020-21 fiscal year which ends in June, the country raked in more than $20 billion in remittances, according to central bank data, setting a new record. This helps explain the country's large foreign exchange buffer, which permitted its largesse to Sri Lanka. It should be noted that the spike in remittances in recent years reflects in part a crackdown on hundi, a traditional but informal as well as illegal, remittance mechanism that does not show up in official statistics.

Bangladesh's recent success was far from preordained. The country is subject to frequent devastating cyclones and flooding, and it has had more than its fair share of political instability and internecine warfare between two political dynasties that go back to the country's founding. As a Muslim-majority country, Bangladesh has seen a rise in Islamic fundamentalism and terrorism, and politics, as elsewhere in the region, have recently taken an authoritarian turn.

While politics and geography cannot explain the country's rise, the key seems to lie in its extremely strong social and human development indicators, crucially including for women. Infant mortality is 26 deaths in 1,000 live births, lower than the 28 in India. Female literacy is 72%, higher than India's at 66%. The female rate of labor force participation is 36%, compared to 20% for India. Remarkably, while this important statistic has been falling for India, it has been rising for Bangladesh. Indeed, across the board, Bangladesh bests India on a range of human development indicators relating to education, health and women's empowerment.

Any comparison between Bangladesh and its gigantic neighbor is always going to be complex. While India is vying to become one of the world's great powers, often billed as a counterweight to China, its small eastern neighbor, which has largely been a footnote in geopolitical discourse about the region, has been quietly flying below the radar and has become in its own way a manufacturing powerhouse for labor-intensive goods, especially garments, something India has never managed to accomplish despite its abundance of unskilled labor and the efforts of successive governments.

This past year has been humbling for India. Just-released statistics show that the economy contracted by a whopping 7.3% in the 2020-21 fiscal year which ends in March, the worst performance in decades. By contrast, Bangladesh's economy is estimated to have expanded by 5.8% in the same period. Thus, while India was the worst performer among major economies during the year of COVID-19, Bangladesh was among the best.

While COVID cases have begun to come down, India remains in the grip of a deadly second wave of the pandemic. On May 18, Bangladesh gifted thousands of boxes of essential medicines and medical equipment to India. A few weeks earlier, the country had sent 10,000 vials of remdesivir, a drug used to treat COVID-19, to India.

In India's 2019 general election campaign, Amit Shah, then the president of the ruling Bharatiya Janata Party and currently India's home minister and Prime Minister Narendra Modi's right-hand man, described illegal migrants from Bangladesh as "termites," vowing to throw them one by one into the Bay of Bengal.

In accepting foreign aid from Bangladesh, India's governing party has had to eat crow. If Bangladesh continues on its current trajectory, India and the world will have to take note of the transformation of a country once written off as a basket case into a rising star.