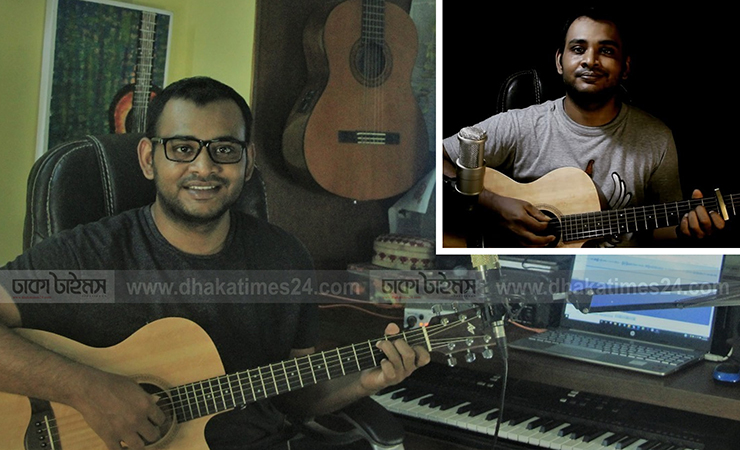 Mehedi Hasan Rana grew up in the countryside. As his father was a government employee, he spent his childhood in Pirojpur. However, his hometown is Satkhira. Currently, he is the Head of Brand, Customer Support, and Telecells at Rokomari.com, one of the largest e-commerce companies in the country. He is teaching playing guitar on YouTube. More than twenty thousand people are now connected to his channel. Shimanto is telling us about him.

He spent his adolescence reading "Rabindra," "Nazrul" as well as "Tin Goyenda" and all the translations of "Sheba". All the national and international children's literature was his childhood companions. He learned singing and reciting at an early age. At the secondary level, he achieved the national award in recitation. He has more than a hundred awards for singing, reciting, and solo performances because of his spontaneous participation at the school and district levels. Besides academic studies, he used to spend his time with storybooks and co-educational activities as a child.

The name of his YouTube channel is "Openchords". Guitar lessons, courses as well as instrumental covers of various songs are being uploaded here from time to time. "Keno piritibaraila re bondhu", "Obakbhalobasha", "Eklaakashthomkegese", "Bhromorkoiogiya" - all these songs are covered on the YouTube channel. This channel is one and a half years old which has more than 21 thousand subscribers in the meantime.

More than 50,000 people are now connected to the Facebook page "Openchords". "As just a guitar learning channel, these numbers are a big achievement for me", said the man behind this channel, Mehedi Hasan Rana. The channel already has more than eighty videos. All the videos have been watched by around six lakh people.

Each day he set aside an amount of time to learn something new about playing the guitar, which is his dearest passion. He tries to cover at least a song per week and upload the video on his YouTube channel. He tries to learn the basics just by watching YouTube. He did an online course on learning guitar from the London Musical Academy. He is currently learning advanced fingerstyle from Fahim, one of the renowned guitarists of our country. Apart from that, he is teaching young people to play guitar online. They are doing these classes from their home.

When he was asked how this idea of making people learn something new through a YouTube channel came to his mind, he said, "While I was learning, the obstacles that I faced, I don't want others to face them and thus I started this channel. I learned from YouTube on my own up to a point. Many can't go to the teacher. One of the problems that I have encountered while learning on my own is, there is no structured course on YouTube or online for free. Even if many people start with a lot of enthusiasm, they can't figure out what to do next. From there I wanted to give structured lessons to help those like me who want to learn on their own. Besides, on my channel, there are easy lessons on all the famous songs. Many have said that I am causing harm teaching in this way. Because if you can learn this easily, many people will learn just to make impressions on others by singing a song or two. But I believe that there may or may not be many others like me, who will try to hold on to these small achievements. But learning is their own business. If there is dedication and will, the one who has to reach their destination will reach there no matter what. The way I fueled myself, if that worked for someone else then at least one possibility would be created for the future guitarist, I just wanted that. I got a lot of good feedback in this one year and a half. Because of this channel, more than 50 students have met and taken lessons so far. Some are taking online classes."

When he was asked about his future plans, he said, he just wants to get acquainted through guitar as well as a future job. There is a less proper fingerstyle guitar player, not only in Bangladesh but also in this subcontinent. He wants to do something good in this sector. Though he does not want to take playing guitar as his profession. He wants to go to his village and get involved in agriculture, at the age of 40. He has plans to start farming in his village. In that case, he wants to stay with agriculture and guitar in the future.