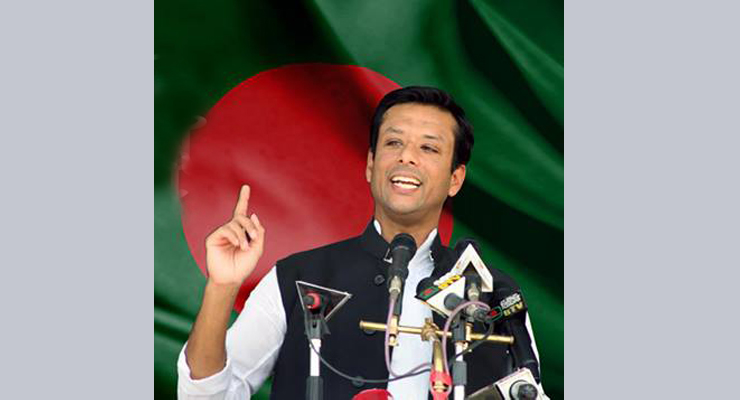 The Honorable Prime Minister Shaikh Hasina’s son Sajeeb Wajed joy has asked the alleged Padma Bridge graft vocals to apologize for their false claim against the Government and his mother. In his facebook page he has given the following statement after the Canadian court dismisses the case on the ground of no concrete evidence to be found.

“The Canadian court trying the Padma Bridge corruption case has found no evidence of corruption in the project and dismissed all charges. The court stated that the evidence was based on "gossip and rumour". In other words, it was made up.

The evidence was fabricated by the World Bank. I had seen the evidence myself during the whole episode. It was quite clearly made up as there were no concrete details, just one anonymous source who was never revealed, even to the Canadian court. In fact, the World Bank fought the court and claimed sovereign immunity against having to provide further evidence. So they filed charges but refused to provide evidence of their claims!

The World Bank came up with this plot against my mother, Prime Minister Sheikh Hasina's government in an attempt to discredit her. Then US Secretary of State Hillary Clinton had instructed the World Bank to cancel the funding of the Padma Bridge in order to punish our Government. She did so because Mohammed Yunus was repeatedly asking her to take action against my mother.

I myself was contacted several times during that episode by US State Department officials conveying threats from Hillary Clinton against our Government if we did not back off Yunus.

Because of him, the World Bank attempted to stop the largest infrastructure project in Bangladesh that would benefit tens of millions of people and transform our south western region. Yunus deliberately tried to hurt Bangladesh using a foreign power.

Did you know that Yunus, his family and friends own approximately 30% shares of Grameenphone, the largest and most profitable telecommunications company in Bangladesh? These shares are owned through a private trust where they are the sole beneficiaries. These shares were financed through a multi-million dollar loan from Grameen Bank, which is illegal since Grameen Bank is funded by donations for micro-credit to the poor and cannot loan this money for private business. Grameen Bank was audited by an independent commission and they found that not a single penny of profit from this trust was ever paid to Grameen Bank, any of its subsidiaries or projects.

Yunus has also never paid any taxes. These are the secrets that Yunus was trying to protect in asking for help from Hillary Clinton. 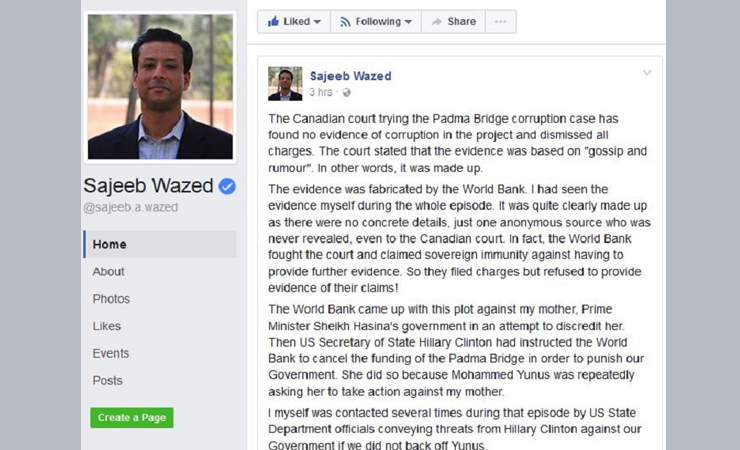 It is also shameful that a section of our so called civil society immediately took sides against our country in favor of the World Bank. They dragged the reputation of several highly respected, qualified and hardworking people through the mud, people such as my mother's former adviser Dr. MashiurRahman. Those people who took sides against Bangladesh are unpatriotic.

They also owe Prime Minister Sheikh Hasina, her Awami League Government and all the people whose reputation they hurt an apology. Indeed they owe Bangladesh an apology.”

SajeebWajed is not actively involved in Awami League’s politics but he is an advisor of the Honorable Prime Minister of Bangladesh. The leading political party in 2010 was accused by The World Bank officials of probable corruption in Padma Bridge construction works. The allegation was directly pointed toward AbulHossain, the then communication minister of the government. SNC Lavalin was the Canadian company which held responsible as a partner of this alleged corruption to take place.