Remembering the Pioneer of Women’s Rights 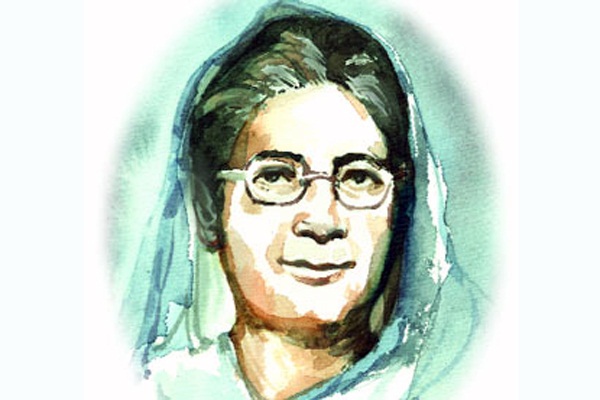 On International Women’s Day, we may remember the outstanding woman who fought for women’s rights even almost a century back from now when the state of women in the Indian subcontinent was limited to their homes. Women, especially Muslim women, suffered more. For them, education was only for religious purposes, and even that had to be restricted to inside their houses, as they were not allowed to cross the boundary of four walls. There was no way for them to explore and learn about the world surrounding them. They had to while away their whole life in domestic imprisonment. Family members felt that this was the only way women could live safely. Women used to hide behind veils, and would not interact with anyone other than their very close kin.

Begum Rokeya, the pioneer feminist of Bengal, who challenged the status quo and advocated for women empowerment in British India. She worked tirelessly to change this suffocating life of women and tried to inspire them to get out of their homes as she felt that one of the most effective ways to do that would be to help them gain education. She felt that if women are educated, the society will be too. Women will, at the same time, become independent and self-sufficient.

She used to study religion in her own home taking help of her brother Ibrahim to learn English and her sister Korimunnessa to learn Bengali. She used to do this secretly as her father had forbidden her to study anything other than religious study.

Child marriage was the norm in those days and Rokeya herself was married off at the young age of 16. Fortunately, her husband, Khan Bahadur Shakhawat Hossain, a native to Bhagalpur area of Bihar was a very understanding partner. Her husband’s support in her revolution was an immense one. He used to help and encourage her to write in English. Tragically, he died just 10 years after they got married. He left her a considerable sum of money with which she first established a school in Bhagalpur named Shakhawat Memorial Girls’ High School. However, her husband’s daughter from his previous marriage prevented her from carrying on with that project. So she moved to Kolkata from there. Here, she opened once again “Shakhawat Memorial Girls’ High School” in her husband’s name, which is still open now under the government’s jurisdiction of West Bengal.

In order to transform women’s restricted and submissive lives, Begum Rokeya used writing as a tool for social revolution. She had already started a little while her husband was alive and she wrote an essay called “Pipasha” (Thirst) and a book called “Motichur” before his death. Later on she also wrote a novel called “Padmarag”, compilation called “Oborodh Bashini”, a short story called “Boligorotoh” and “Narir Odhikar” (Women’s Rights). However, one of her most prominent works remain a short story called “Sultana’s Dream”. Through the two main characters’ dialogue, Begum Rokeya conveys some valuable and progressive messages which to date are applicable. She talks about a world in which the women are free and it is filled with love and peace. She talks about religion as it should ideally be:

“Our religion is based on Love and Truth. It is our religious duty to love one another and to be absolutely truthful. If any

'No, not with death. We do not take pleasure in killing a creature of God, especially a human being. The liar is asked to leave this land for good and never to come to it again.'

Some of the issues she points out in the story are astoundingly still relevant for our society today; like solar energy, minimum age of marriage for women and war. It is a story which is a must read for all men and women even today.

Begum Rokeya established the Anujman-e-khawateen-Islam (Islamic Women’s Association) to bring about social reform regarding the state of women and their right to education. She was always focused on bringing about advancement in the lives of women until her death in 1932. Her plea to men were that they let women explore their true potential on their own device, and help them grow in own forte. She spoke of women working equally with men. She was the lone fighter in this struggle for women’s rights at the time that are now endorsed and supported by so many women and even men today. Her work is attributed to a society that is better and more enlightened for a woman.

The writer is working as Librarian at Centre on Integrated Rural Development for Asia and the Pacific (CIRDAP). She can be reached at [email protected]