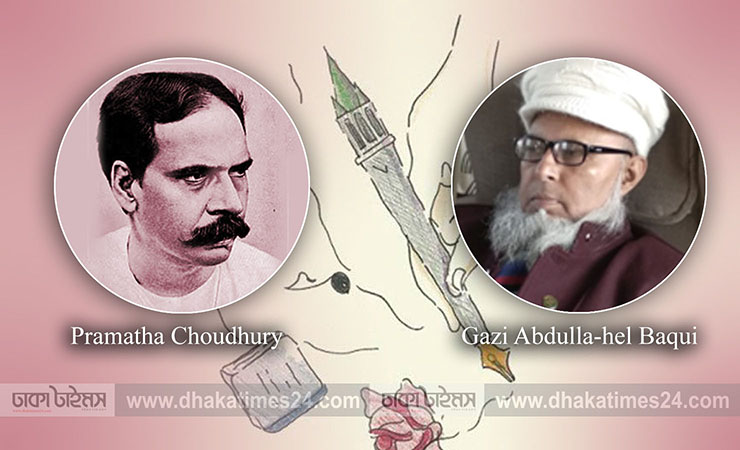 (Pramathanath Chaudhuri, Bangla: প্রমথনাথ চৌধুরী; 7 August 1868 – 2 September 1946), known as Pramatha Chaudhuri, Pen name Birbal, was an eminent poet and writer of Bangla literature. He was the nephew of Rabindranath Tagore as his mother was Sukumari Debi, the second sister of Tagore. He was also a noted sonneteer whose book having a sonnet sequence called “Sonnet Panchashat”, a collection of 50 sonnets published in 1913).

The spotless worthy act of Shahjahan, steady and beautiful.

Its undisputed and undying body is composed of white marble,

Its heart is engraved in sapphire, emerald and topaz.

You smile, where are Princes Dara and Secondar now?

All of you are open, nothing remains veiled,

The unveiled beauty is treasured in layers,

But you are most deprived of mysteries of love.

Your heart’s kindred point is emptied of shade and passion.

Momotaz! You are not the crown, but the idol of pain.

You are the unhindered frolic of delight, creation and arts.

Having Collyrium-lined eyes, ruddy tint on lips by betel chewed,

The tips of nails are coloured red with Hena,

The queue is tied up with gold thread and Turkish handkerchief

You were the toy of the emperor’s sports.

Our mind is shaped by the part of nature,

I see the reflection of the world drawn distinct,

It is manifest in indication, the real remains secret.

In every heart there is a secret abode,

The mind’s bird lies latent with its wings folded

The sleep the yogis know is to keep awake

It is a futile attempt to unveil his dream.

The right message of heart’s mystery

If gets disclosed in words is a lie.

What I gain out of language floats on the surface.

Whatever is done self-willed looks lustrous.

But the truth covering its face laughs beneath it,

Yet it does not come into view without veil.

To make your rosy eyes bright

I have set nightingale’s tune in sitar.

I shall sing love song in Persian mode

Stands quite opposite to my poems

Your eye-lids are bent at my singing

The lid-borders are outlined with kohl.

Playing more on flute and violin

I have not yet had your heart’s reply.

So today I leave all such Dhrupod Dhamar,

In light humour I express my hope and love.

This song of mine contains a little sympathy,

In my boyhood one day I went alone afar from home

For observing the ceremonial immersion of idol.

At night losing the path I kept on roaming about,

Fright overwhelmed me as I saw the cremation ground in front.

In the dark I got distressed by roaming and whirling about,

Suddenly holding a flambeau, in a beggar’s voice,

A rosary in hand, a long loose cloak hanging on his body,

He was uttering the term “There is no God, but Allah!” learnt by heart.

Even today if disappointment grips me hard,

No riotous noise of the world enters into my ears.

The fakir-heart invokes “There is no God, but Allah!”

In the sky I hear the message “Removal of Troubles”!

During study I could never stand first by memorization.

The touch of youth could not break my heart.

Floating in the tide of youth I did not dive into extravagance,

I am not a sly and skillful speaker at the high court.

By smoking charas drug I did not go to save my country.

Either male or female baby was not born to every year.

I did not shed tears over the glass of wine!

I have never deposited money; neither title conferred on me.

Without leaning on the readers I have written books.

I have never given advices and sermons to others.

My life is not so worthy to be an example either at home or abroad.

Yet my intelligence is not ripe at all though having grey hair,

I shall not turn to be an ascetic in my afterlife.

Dr. Gazi Abdulla-hel Baqui, poet, writer, translator, and an academician, has already authored many books and composed a great number of poems.