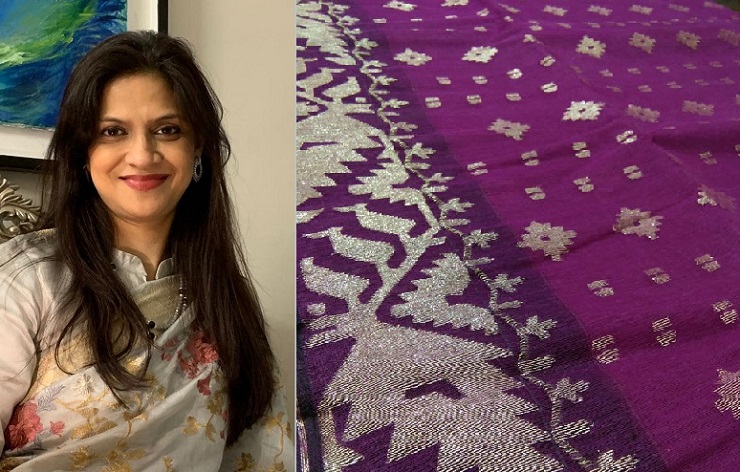 Jamdani is a fine muslin fabric origanted in Bangladesh, not very new in the global map. The opulenceofjamdanidesign not only makes it’s a technical marvel but also guarantees its omnipotence in the handloom industry, no machine could ever surpass its richness.The much appreciated and cherished art of Jamdani weaving of Bangladesh has been duly recognized by UNESCO as the intangible cultural heritage in 2013. It is at the same time a recognition for weavers.

Genesis of it can be traced back to the Mughal era, but it’s place of origin was Sonargaon, Dhaka, Bangladesh. Sonargoan, Bangladesh still continues to be the hub of jamdani or as the local call it jamdanipalli. The word Jamdani has been derived from Persian word ‘Jam’ meaning flower and ‘Dani’ meaning vase. As the name suggests jamdani traditionally had flower motif vividly woven on a loom into the finer fabric by expert craftsmanship.

During the Mughal era, the jamdani and muslin production was at its zenith as it was patronized by the Mughals. The region around Dhaka was naturally blessed with the type of cotton called ‘Kapas’, which could produce fine, long and soft cotton fibres. The Julahas or weaver would then turn this fabric into unparalleled jamdani sarees. The region around Dhaka, between the Old Brahmaputra, Meghna and Shitalakhya rivers was very fertile and suitable for growing this cotton. The water in these rivers were rich in minerals and the soil in the river banks contained sufficient moisture and heat, all of which aided the cultivation. The river water was used to dye and clean the cotton, and its mineral content gave a glaze to the cotton fabric. The network of rivers not only aided in giving the julahas the finest fabric but also in transportation and providing the local and overseas market.

Jamdani is known, not only for the finesse or intricate fabric but also for being overtly priced. The hard work and toil of the weavers are not known by many. The cotton threads are dyed and is strengthened and softened by soaking overnight in a solution of rice water starch, allowing the women to wind it more easily onto bobbins. It is tedious work done early in the morning, usually between 4 and 9, before the increasing heat dries the thread, making it more difficult to handle. The wound bobbins are sent to another worker who prepares the warp on a beam. Afterwards, the warp is sent to the weaver’s house where it is set up on a loom. Interestingly the designs are woven directly into the fabric by a weft technique. Usually two men work at one time on a loom.

During the British colonialism the Bengal jamdani and muslin industries rapidly declined due to colonial import and rise in industrial manufactured products. It was difficult to compete with cheaper industrial product. The weavers toiled harder and suffered greatly as they were unable to match the cost and swift production of machines.Jamdani is labour intensive form of weaving, a final product may take five months or more. The final productof handloom jamadaniwas a product of unparalled technical marvel and finer creativity of the artisan. In their endeavor to keep up the tradition of jamdani, the artisanshave through ages hold on to their exquisite splendor of creativity and passed on to their posterity.