At least 10 inmates killed in prison riot in Brazil 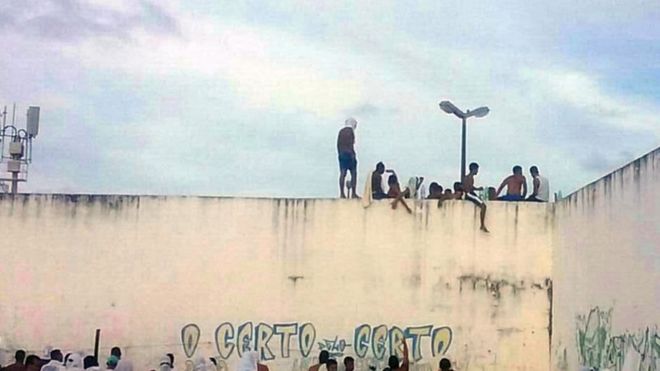 Inmates have seized control of the largest prison in the north-eastern Brazilian city of Natal. Police say at least 10 prisoners have been killed at the Alcacuz jail.

Many others are thought to have been killed in fighting between rival gangs at the prison in Rio Grande Do Norte state. This is the third major riot in Brazil this year. Nearly 100 inmates died in riots earlier this month in prisons in the states of Amazonas and Roraima.

The violence inside Alcacuz jail began on Saturday afternoon, when members of one of the powerful criminal organisations present in most Brazilian jails attacked rivals in a separate wing.

"We could see the heads ripped off'' three of the killed prisoners, said Zemilton Silva, coordinator of the prison system.

Explosions and gunshots could be heard from outside. Major Wellington Camilo, commander of the Rio Grande do Norte state prison system, said police would wait until the morning to enter the compound. "Many people have died. But we simply cannot get into the prison now," he said. No prisoners had escaped, he added.

Dozens of relatives have gathered outside, waiting for information. Riots are not uncommon in Brazil's overcrowded jails, which are largely controlled by powerful criminal gangs.

But the scale of the violence this year has put pressure on President Michel Temer to address the problem. After the Amazonas prison riot, the government announced plans to build five more high security jails and to create new intelligence units to try to curb the power of the gangs behind bars.