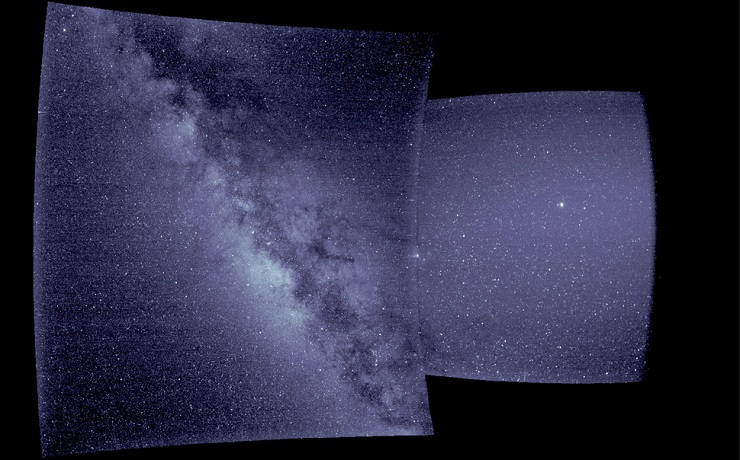 Much like NASA's TESS telescope, the Parker Solar Probe recently beamed back "first light" data the first images from its suite of four instruments set to study the sun's corona. First light data gives NASA a chance to check that all systems are firing as they should be.

The first image from Parker isn't such a big deal for what it's snapped in its field of view, but it is an important milestone in ensuring the spacecraft's systems are working as intended. On Sept. 9, the protective door that encapsulated the Wide-field Imager for Solar Probe (WISPR) were opened for the first time, allowing Parker to snap its first image of space.

WISPR contains an inner and outer telescope that sit behind Parker's cutting-edge heat shield. The first image from the probe does not contain the sun, but it does contain another mainstay of the solar system: Jupiter. The gas giant sits is the bright spot on the right-hand image, just right of centre.

The probe also sent data back from its three other instruments on board: ISʘIS, FIELDS and SWEAP (more on those below) which are all dedicated to unraveling the mysteries of the sun by taking detailed scientific observations.

ISʘIS, which stands for Integrated Science Investigation of the Sun, will be used to measure activity such as solar flares and coronal mass ejections -- high energy bursts so powerful they can threaten electronics on Earth. The FIELDS experiment investigates electric and magnetic fields around the sun, while SWEAP (Solar Wind Electrons Alphas and Protons) three instruments will take detailed measurements of the solar wind.

First light data showed all instruments were operating effectively -- and that bodes well for NASA and its research teams as we get closer to the sun than ever before.

The Parker Solar Probe is currently zipping through space and will complete the first of seven flybys of Venus on Oct. 3. That will put it in an elliptical orbit around the sun that lasts 150 days.