We have to build social movement against Drug: Dolon 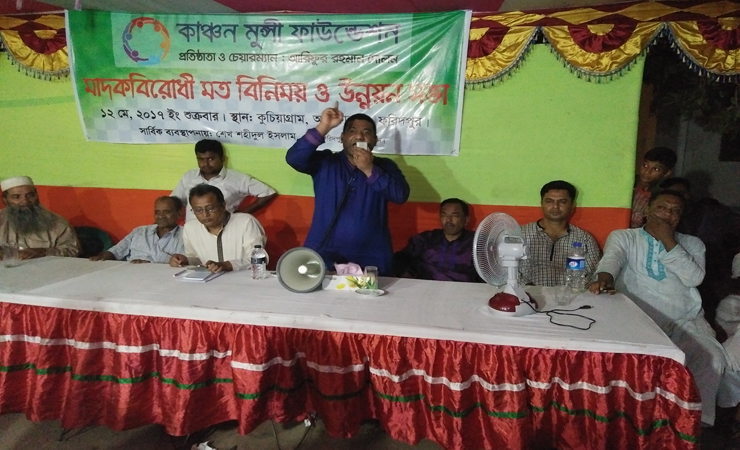 Drug addiction is a social curse. A significant part of our youths are now affected by this sickness. Gradually, it is taking a horryfying look. If we failed to stop this social anathema as fast as possible then it will definitely bring undesired future for our future generation.

The speakers said this at the discussion on anti-drug and development meeting organized at kuchigraame in Alfadanga upazila of Faridpur on Friday evening. Kanchan Munshi Foundation organized the meeting.

Chairman of the Foundation & Editor of Dhaka Times and Ei-Somoy Arifur Rahman Dolon said in the meeting that, Personally I’m one hundred percent anti-narcotics. Frankly speaking, I don’t want that Our childrens get into drug abuse and lost their life prematurely. Mainly because, Drug reduces the natural intelligence of humans. He then told that, Development is happening throughout the country. In order to continue this development progress, our students, young boys and girls should take the helms right now. It is high time to create social awareness in each and every family. And the Pioneer of our countries today’s progress is none other than our Leader, Prime-Minister, Father of the country Bangabandhu Sheikh Mujibur Rahman’s daughter Sheikh Hasina. Whenever and Wherever she calls for a meeting or attends rally, she strongly raise her voice against drug addiction. She considers Alfadanga as her very own upazila. That’s the reason, I invite all of you to eradicate any sorts of drug from Alfadanga upazila only then I can assure all of you that Alfadanga won’t be lag behind in fact Alfadanga will be far ahead from other upazilas.

Dolon also state that, “Everyone is now started saying that this village is far back in development.” Even though I’m not an elected public representative. None the less you people can have my words that this village won’t be backward in developments from now. The Chairman of kanchan munshi foundation also expressed that, earlier on there were niggardliness to send the problem of ours at the highest level of the government. To be honest, there were absolutely no intention to reach the problem of ours on that level. But now the whole scenario is different because there are alternatives. We are now very much able to deliver our problems to the highest level of the government. And if we rightly do so then our requests get easily solved. I’m now giving you people a small example which many of you may have heard. Many might don’t know. Our rulling government has already allocated a amount of three crore taka for a auditorium. Of course, I’ll say this loudly that I’ve tried my utmost to bring this project.

The Ei-Somoy Editor added that, our Prime Minister Sheikh Hasina is now well aware of the fact that Alfadanga is far behind in progression than other upazilas. The bitter truth is, no one ever informed her with this information. Our Honorable LGRD Minister Khandokar Mosharrof Hossain is also from Great Faridpur. He loves us exceedingly. And He’s now showing his love by giving us with open hands. Infact two of the most dominant minister of the government wanted the allocation of this auditorium in their upazilas. It has been said that they will get their desired auditorium from the next Budget allocation. But this is the time for Alfadanga.

The Chairman of Kanchan Munshi Foundation also told that, Barangkula Bridge’s construction is now going on in full swing. Many of us thought it would be nothing but impossible. This is about last year december, few leader type individuals of alfadanga even said that, they have been trying year after year. But anything didn’t work out. Now this is a perfect example of shameless statement. If Government can build bridges at there in less than three months even through my efforts then many big leaders are out there, they couldn’t be able to do that, is this believable? That actually means they don’t give a try not even once. When people face any kind of trouble, they go to their leaders for help. My ethics is simple first this area must have to be benefited and every single person of this region need to feel happy. This is all i want. You all have to be united. All you have to do is to be assembled for development. InshaAllah Alfadanga-Boalmari-Madhukhali will become a model parliamentary seat.

Dolon keep saying that, No matter how many times the parliamentary election did happened, each and every time Awami League nominated candidate won in here. Then when Awami League is in the driving seat why would we get reft of development?

Why would we stay behind? Sheikh Hasina doesn’t want to bereave us. She just wants to keep us ahead. And again there are few leaders who just wants to keep us in backward. Because if common people’s problems get solved at ease then these people won’t go to the doors of those leaders for any sorts of favor. Perhaps some people believe in this principle. On the other hand we look on that every territory can do equal improvement.

Awami League leader Dolon also expressed that, Bir Shreshtha Munsi Abdur Rouf’s village ‘rouf nagar’ which is sited in Kamarkhali of Madhukhali is a deprived area from development. There’s a public library over there. Memorial museum at there is totally unfortified. The saddest thing is there was no electricity. We have visited there. We raised this matter at the highest council of the government. Our endear Prime Minister Sheikh Hasina instantly took all the steps to reach electricity over there.

At that meeting Faridpur district council member and the director of kanchan munsi foundation Sheikh Shahidul Islam said that, the developmental works which Arifur Rahman Dolon is constantly been doing, He’s doing all these only for your love. Not in an exchange for anything. He has a position where Bangladesh’s development budget gets allocated. Whither often many delegates couldn’t go. We need to identify that person who is of the people, by the people and for the people. We want our locality’s headway solely through the command of Arifur Rahman Dolon. You people need to stay beside and must have to encourage Mr. Dolon so that he can serve the local people more and more.